Agra's Fort is more than a fortification, it was also the home of the Mughal Emporers during the 16th and 17th centuries. Built by Akbar, after abandoning Fatehpur Sikri in 1565. It took eight years to build this massive fortification, which is quite amazing if you think there was no machinery or heavy lifting equipment that we are so heavily dependent on today. After the Mughal's, Agra was controlled by the Jats, the Marathas and finally the British until 1947.

It was the home of emperor Shah Jahan the man who constructed the Taj Mahal as a mausoleum for his beloved favourite wife Mumtaz Mahal. It was also here that he was imprisoned by his son, (for the last 8 years of his life) to stop him building the black marble exact equivalent construction of the Taj Mahal for his own mausoleum. Black to represent

all his badness. He could look out of his quarters for the remaining days of his life and see the magnificent structure he had built in memory of his beloved - the Taj Mahal on the skyline. On his death, Shah Jahan's body was taken by boat to be laid next to his beloved, in the Taj Mahal.

Agra flourished under the Mughals, attracting craftsmen from their extended empire in Persia, Central Asia and India itself to build the luxurious fort palaces, mausoleums and gardens.

Agra Fort's red sandstone ramparts impose themselves on the banks of the River Yumana, encompassing a vast area of courtly buildings, built by successive emperors. There is a deep mote surrounding the fort, this once contained water from the River Yumana, sadly the river level has fallen significantly since these times.

Again we would recommend taking a guide, check they have a Indian Tourism card. You will find them very useful in explaining the significance of each building as you travel through the arrangement of halls, courtyards, galleries, dungeons, main harem building, the marble pool, and where Shah Jahan was imprisoned in Agra Fort. 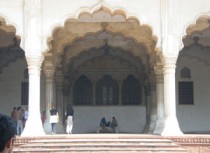 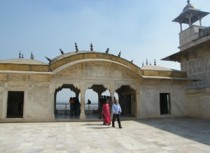 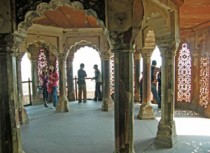 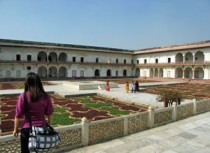 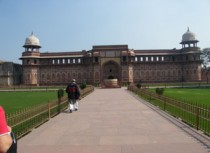 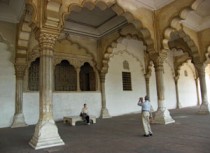 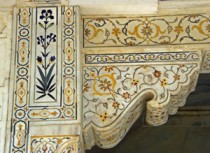 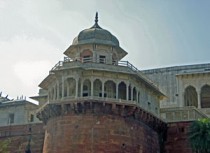 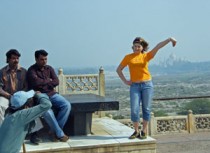 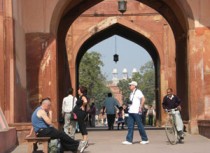 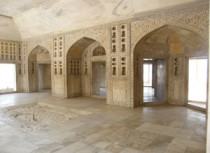 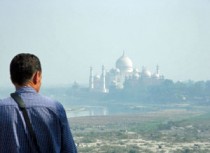 We would highly recommend a visit to Agra Fort.