The elephant ride was a highlight of our trip to Orang National Park. We thoroughly enjoyed our visit to the Park and could have spent more time in the park itself, as there was so much to see and places to sit and watch the wildlife, but the elephant ride was certainly very special.

The elephants had been out on anti-poaching patrol that morning, so they arrived with their young calves at 3pm. Most of us got on and off the elephants via a large platform, which made it very easy. Two of us climbed on to our elephant via an ordinary plastic chair, which was quite noval. The elephants were absolutely fine with us on board, the Mahout was fully in control and we set for the long grass on the plain below, elephant

In the tall elephant grass we were looking for the Indian One Horned Rhino of Orang National Park. Very rapidly we could see why the elephant was required in this tall, dense grass which on occasions towered over us by several feet, higher than the elephant and us combined.

The Mahouts took us along various game trails through the elephant grass, to a number of wallows, some dried up and others low in water. There was plenty of evidence that the rhino were about, but where were they?

The Mahouts continuously spoke to each other as we rode through the elephant grass, no doubt debating where to go next. One of the Mahouts split off to take his elephant and passengers along a different game trail. It was he who first found the Indian one horned rhino that had so far eluded us. It had been grazing in a grassy clearing within the elephant grass.

The other elephants joined the one elephant at the clearing, resulting in the rhino becoming rather agitated, letting our loud snorts and thundering up and down the grassy patch on to another muddy alleyway. In turn the elephants became agitated letting out heavy snorts and trumpets as they were concerned about their young calves behind them.

We tried to get a photo and see the rhino as best we could. One of our party was able to get an excellent photograph, the rest of us got the rhinos head and ears peering out behind his grassy hide.

After a few minutes the Mahouts called it a day and we left the rhino in peace, heading back across the grass plain to our start point. I believe we all felt it was very enjoyable experience, unfortunately two of our company (two slim ladies had shared a seat, so as to give us all a ride), they found the ride very uncomfortable as the seat was really only for one person.

More images of our elephant ride (Mouse over images for captions) 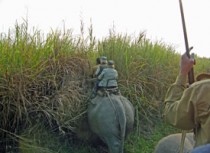 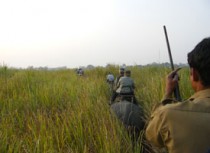 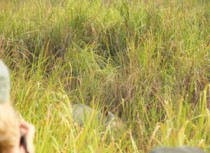 Yes we would highly recommend the elephant ride in the Orang National Park.